Suzy & Los Quattro
with The Rubinoos in Spain this week!

7th - Wurlitzer Ballroom, Madrid (This is a fabulous joint, kids!)

Less than a month until the UK Quattro shows. Make it a date!!
Posted by Lindsay Hutton at 6:32 PM No comments:
I have a couple of pieces of good news to impart in this short burst.

Firstly, "No Blokes In The Boonaraaas!!!" has disbanded as a result of Tine rejoining this fab combo.

However, here's where it gets a little odd. If you read these comment things then you may have noticed that I suggested to Joss that there's a film to be made about Record fairs. He then told me about "Vinyl" of which I had no idea.

So I went to YouTube, as you do and I found the following clip of the film maker, Alan Zweig. It scared me because I kind of recognise some aspects of what he's talking about to symptoms of my own condition. Now I need to see the whole thing and feel like it might be somewhat more unnerving than any horror film. Anyway, you've been warned. 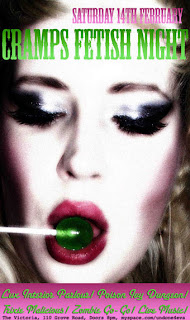 The Cramps Fetish Night is a valentines toe-kissing of rock n roll band The Cramps. Launching this February at luscious boozer The Victoria in London’s east end, with fabulous themed rooms, the Lux Interior Parlour and the Poison Ivy Dungeon.

The parlour is a psychedelic powder room filled with huge cans of hairspray and jungle soft furnishings. The dungeon is a dark and brooding boudoir, with a gory human buffet and shrines to the scarlet lady.

Live entertainment is from The Cramps Fetish Night House Band comprising underground heroes from the London scene, also go-go from Trixie Malicious and Femme Ferale Zombies. Not forgetting the highest hair competition, with a trophy for the hair closest to god!!!