YOU'RE LOOKING AT THE ALBUM OF THE YEAR! 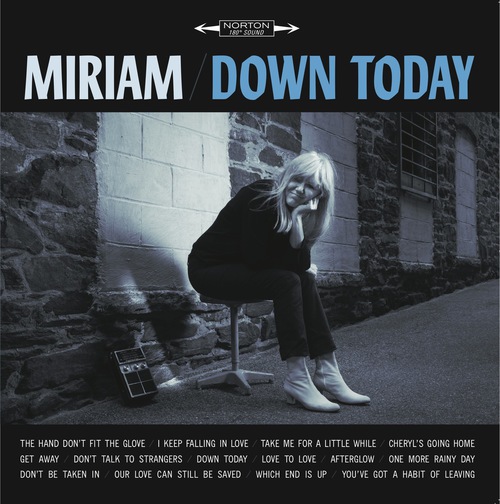 It hardly seems possible that it’s been more than a year since “Nobody’s Baby” but it bloody is. Time is shooting in at a rate of knots and Brother Colin Duff brought back copies of “Down Today” from Ponderosa Stomp, the second instalment of rock’n’roll greatness from MIRIAM and Sam Elwitt. It can’t possibly be as good as that first record I hear you say? Well, like any great episodic series then it seems that these kids are just gaining momentum.

First time out I think that people were simply knocked sideways by the way MIRIAM steeped out front. This semester there’s an assured confidence that suggests that the lady is now very comfortable in her role as a bona fide pop singer. Anyone that knows her is more than aware that they broke the mould after she came along. Everything she does is 150% genuine and once again, the choice of songs and their realisation is what I believe to be perfect.

Sam Elwitt’s knack for the way he makes Mim’s voice shimmer amongst the arrangements is nowt short of heart-stopping. Be assured that this is no exercise in any sort of retro box ticking. Sonically, it’s a bold celebration of exactly where popular music needs to be in order to make it exciting again. I can only imagine how this will sound while sipping a gin tonic in Weirdo or Wurlitzer but I sure look forward to finding out...

Until then, I’ll just keep spinning it to all and sundry. If you’re looking for a gift for someone with ears then this my friend is most definitely a good shout. You can gift it to yourself too. We’re all in the same boat and musical kicks do not ever come any better than this. Gregor Kitzis’ strings make the whole thing soar and it all just clicks. How the heck do these people do that?

There is no smoke nor are there mirrors, just the most honest, smouldering sound that one could conceivably wish for. “Down Today” will raise you up like you perhaps never thought recorded music could do anymore.

Get yours at NORTON HQ... it’s also available on vinyl and CD from Soundflat, Strange Vice and similar mail order emporiums.

It can also be consumed in digital format from the usual suspects. I don’t actually care how you listen just so long as you do.
Posted by Lindsay Hutton at 6:09 AM No comments:
Newer Posts Older Posts Home
Subscribe to: Posts (Atom)