THE VELVET UNDERGROUND ON THE LAWRENCE WELK SHOW, 1968 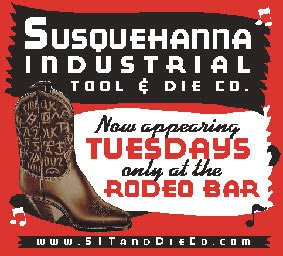 Posted by Lindsay Hutton at 9:26 PM No comments:
"NEXT Saturday (April 15th) - come and see the world famous Shock And Awe for FREE to celebrate the release of "SHOCK AND AWE GO HOME" with the added bonus of some audio/video live action from Paul Research.

Come along, bring your friends, free night in the subway, doors open at 7:30 first band on at 8 - has to be over by 10:30 (at the latest - I plan to finish playing by 10). The plan is to play the whole of the new album from start to finish and then play some of our older songs, so if you've got any requests, let me know ? hopefully see ye there ? Cheers, Murray"
Posted by Lindsay Hutton at 4:39 PM 1 comment: 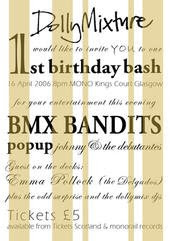 A missive from Duglas T Stewart....

"Here's some info about a show we have coming soon in Glasgow. A special club night, presented by the wonderful ladies of Dollymixture. We'll be playing something like a 45 minute set and as you'll see below there are plenty of other good things on the bill... this is from their myspace site...

We're extremely excited to announce the lineup for the Dolly Mixture 1st Birthday bash at Mono on Sunday, April 16 (8 - 12.30pm). Hold on to your hats as here's the full details: Live we have *drum roll* : BMX Bandits (need no introductions I'm sure) Popup (Just signed to Chemikal Underground and will do fabulously well this year) Johnny and the Debutantes (Only band to play Dolly twice. Selecting spesh outfits for the party but we hope it's not their birthday suits!). Our guest DJ for this momentous event is Emma Pollock from the Delgados. Emma has been gigging on a solo basis for the last wee while but for the birthday she'll be setting her guitar aside to play her selection of lady sounds. We'll of course be handling the decks at various points too. Tickets for the birthday are £5 and available from Tickets Scotland and Mono from Wednesday, March 29. Subject to booking/cc fee of course. Your £5 also buys you free badges, balloons, easter treats (mini eggs, dolly sweets lala whatever we can find), games (diplomatic hats mibs for Jen n' Ross, big style pass the parcel, god knows what else), perhaps a slice of the birthday cake too! Oh, and there's a few other surprises we're keeping schtum on."
Posted by Lindsay Hutton at 3:37 PM No comments:
Well, the bird flu is here. Or is it? The media has come down upon the east neuk of Fife like a virus this week and the news bulletins look like they're being directed by Bill Forsyth. Cellardyke (or Sillardike as my Granny used to say because she came from just along the coast) looks like the reporters are on the set of Local Hero. Maybe The Fence Collective will appear in the remake of the ceidlidh scene? Have you taken your poultry inside?. No? Me neither.

Another big news story this week has been that "single" that made it to the top of the charts on downloads alone. Before it was even "released". Isn't that prone to the very apex of chart rigging? Surpassing the days when retailers had to write sales down and people who worked in chart return shops had cart blanche to list their fave at every turn. Of course in these days. The good old days before computerised stock checking and god knows what else, this was carried out in good faith. I'm not saying that a mass download was planned or even undertaken but isn't it distinctly possible that this placing was gotten through subterfuge? Couldn't I just sit here and download something again and again for it to register? Like sending your family and their family and a slew of other people to buy copies of an actual single you made in a bid to secure chart notoriety? It strikes me that this is a system open to abuse. They haven't got to the point where it's limited to one download per household. And what if every member of said household just has to have that "track" on their bloody iPod? Preferring to support the artist rather than just cop a dub of their old fella or wummin (delete as applicable). More power to 'em if that's the way they pulled it off because the Top 20 is such a mire that they're welcome to it. One of the only pleasures I get is to sit and watch Top Of The Pops (on whatever night they switch it to) and seeth. That's how fucked things are around here. If it weren't for the prospect of The Sopranos (cheers H) then I dunno what I'd do.

Go outside? You can forget that... i'm feart of catching that bird flu if I walk past a refrigerator o' chicken or whatever. You can't take any chances, like, ken?
Posted by Lindsay Hutton at 6:43 AM 1 comment:
Newer Posts Older Posts Home
Subscribe to: Posts (Atom)