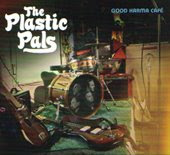 This is as a consistently good melting pot of influences as I’ve heard in recent times. I’ll leave you to determine who or what these are but will add my consideration that Häkan’s vocal reminds me of Ian McNabb of The Icicle Works. “She’s Going Back” was the one that sealed that comparison being that I always thought it would be cool if The Del Lords covered “Understanding Jane”.

There really is a neo-Liverpool sound to this Stockholm combo that sets this set aside from much of the psychedelic pop that is mane under laboratory conditions to a business plan. The Pals manage to circumnavigate all that with what is obviously a passion to simply create bloody good songs and see where those lead ‘em.

If you heard one of these cuts on the radio then whichever one it was, you’d want to know who it was. Those guitars are utterly infectious as they jangle and pummel, sometimes simultaneously. If what goes around does indeed come around then their music will take them far. 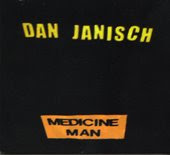 I found this in a pile of cds and realised that I hadn’t mentioned it. It’s been here for some time and Dan may well have put out a follow-up by now but hey, there’s no sell-by date on this produce. His mention of “grasshopper” in the title track is timely given the recent demise of David Carradine.

There’s a Peter Sarstedt quality to his voice and relaxed strumming. Great songs too. Could be a touch of Neil Diamond via Steve Earle lurking in there too (“Big Trip”). “Sayonara Chinatown” has an understated Modern Loversesque toyshop Velvets rockin’ factor that could bring a house down. 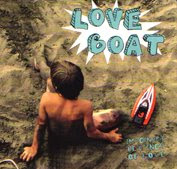 The post Black Lips world is reverberating to this quasimercybeat sound these days. Love Boat is from Italy and they pack a skiffle factor into the soup that I actually prefer to the aforementioned beat combo. There are hooks buried in the foundations of these songs that give’em a rowdy campfire type vibe that channels aspects of The Undertones. Pretty damn snappy. I think that if this was on vinyl then some snaps, crackles and pops would only add to the sense of occasion. “Funny Guy” employs a kazoo to maximum effect that will thrill or irritate depending on your feelings about that particular instrument in popular music. 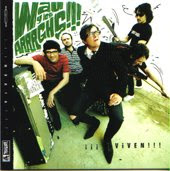 Rip roaring timeless garage punk from Spain. Their name pretty much lays it out chapter and verse and I imagine that their shows will be pretty sweaty affairs. I have quite a low threshold these days for bands that claim to play this kind of music. It often completely misses the pan. These guys don’t dribble a drop though and indicate that this stuff can still wet the whistle.

Of course, you heard it all before but not with quite so much gusto. Powered on farfisa propulsion and blazing guitars, fans of The Fleshtones could get particularly excitable around these arrrgh blokes. 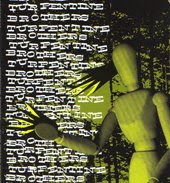 I don’t know anything about these folks and I have no time to google (or bing/whatever) them right now. I can however tell you that although their “music” is as rough as the proverbial bear’s arse, it is very compulsive, like getting a wheen of tiny electric shocks at one time with relentless regularity.

Again the keyboard activity takes centre stage in keeping things up in the air. It makes sure that things don’t lag. If the Samoans had taken a garage pill and adopted a Hammond then perhaps some of their work might have sounded like this.

Doesn’t sound like they’re running out of “Ritalin” anytime soon to these ears. “Tired Luxury” is simply an exercise in changing the pace for their own ends. 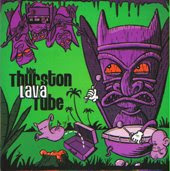 Buoyed by the discovery of this new Bambi’s cut earlier, I remembered about this. Not similar at all except in the spirit to which they approach the cinematic nature of instrumental rock’n’roll. Displaying it as a danceable solution and also as a canvas to accompany a vivid visual projection in your napper, I believe that this is their 4th album with another just about ready to pop.

BS contains the freshest, most scintillating take on “Miserlou” I’ve heard in many a moon. 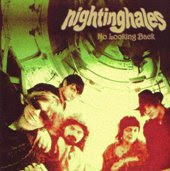 Nightinghales – No Looking Back (Folked Tongue)

I don’t know what’s with the spelling and I’m not entirely sure about the title either because the music here definitely harks back to the sixties. Still, they’ve infused their sound not unlike The Dandy Warhols to create a punchy concoction. The vocalist Ben Sommers Bachman has a distinctive style, maybe a couple of octaves lower than Russell Mael but that’s who he reminds me of.

“GM Polka” has a rock/beat undertow bolstered by handclaps that suggests that if these kids were to get the breaks then they could quite feasibly find themselves in demand. “Damaged” does a pretty reasonable job of combining The Dolls with The Faces. Serendipitous as Johansen and Co made their UK debut with those guys way back before these folks were even born.

“Buddy Wooly” reminds me of Redd Kross without ever sounding like them. Ditto for Pavlov’s Dog. Actually, when I spun this the other day – I made a mental note about getting their records down from the loft. From Ninian Hawick country, Minneapolis – Nightinghales have a pretty good grasp on what it takes to be poptastic! Let’s not tempt fate by using expressions like soaring but I reckon there are a lot of folks out there that would be pretty pleased to hear what they’ve got to offer.

There’s some stuff to be going on with then. I’m gonna make some coffee and grab some P Dog and Bruce Anderson while I compile the “coming up” list that was meant to be done yez'day.
Posted by Lindsay Hutton at 1:42 PM

Some good albums here.
Jack Oblivian is involved with the Turpentine Brothers (not on this LP)

Talking about Jack : In The Red is gonna issue a live album (Barristers 1995) by the Oblivians as well as a new album by the Reigning Sound (Love & Curses)