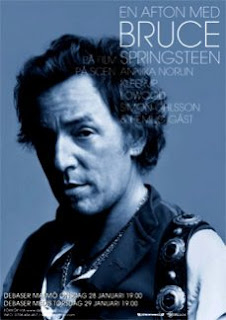 OK, let's leave that fact that the opening track on Bruce's new album seems to lift the basic components of "I Was Made For Loving You" by Kiss. It's sort of unfortunate but there you go. I know that some of you hate Springsteen like I do Primal Scream and I know of others who detest both. Some were won back by "Dream Baby Dream" recently. Americans (and Germans, another maligned breed) can do irony but maybe it doesn't manifest itself like the Brit versh of that particular commodity and why the fuck should it? It should be stated that I also have a soft spot for Kiss but have become appalled at Simmons in particular. My Kiss are better than The Stranglers routine is, I believe, a firm crowd pleaser .
However, Walmart and the Superbowl notwithstanding - you can't write off a large chunk of his back catalogue. And I imagine that it's this material that will make up the content of the tribute shows taking place in two weeks time at Debaser in Malmo and Stockholm. The info is here if you're in a position to cut along to either of these events.
Mark Hagen's recent interview with the man himself will be broadcast on BBC Radio 2 on January 24th. When he was there, Mark suggested to The Boss that he listen to Hello Saferide. Bruce, if you did that, then as far as I'm concerned you can recycle whatever the heck you like. With bloody bells on. Ha ha.
Update: Mark's Springsteen interview can be read here.
Posted by Lindsay Hutton at 2:16 PM