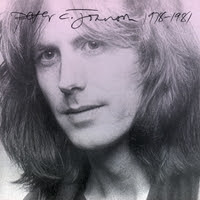 Peter C Johnson 1978 – 1981 compiles tracks from the A&M and CBS albums he made during this time. This limited reissue has been put together to benefit the Mark Sandman Music Project in Cambridge, Ma.

Mark Sandman of Morphine died onstage in Italy in 1999. He was “an essential thread in the fabric of Cambridge life” and this facility has been set up in his memory. For anyone who doesn’t know PCJ was all about minimal instrumentation/maximum atmospherics before most. His alumnus includes Nils Lofgren and Bonnie Raitt as well as Carlene Carter and Irene Cara (!). The song “Snowblind” is one of my favourite cuts of all time because every time I hear it I’m transported to another place. It’s dream-like ability to conjure up a trancelike condition has been long overdue. My vinyl copy can rest up now.

Hopefully, as well as providing much needed financial aid to a good cause, this compilation will introduce PCJ to a whole new generation. People who need this kind of aural pop kaboom to soothe away the bullshit that passes for what’s left of the established music biz. This stuff sounds a lot fresher than most all of the stuff that was “happening” at the time. Built in obsolescence wasn’t part of the gameplan back then. There was room to breathe. 30 years later we can use all the clean musical air we can get. So head over to CD Baby, listen to a couple of cuts and see if you agree.

Don’t lollygad though, you need to score one before they’re all gone and you have to live with yet another regret on top of that pile you have already.
Posted by Lindsay Hutton at 2:05 PM