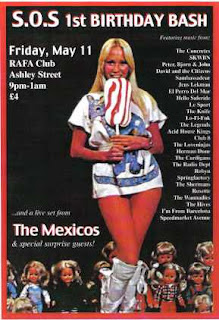 SOS: Sounds of Sweden is celebrating its first birthday on Friday, May 11 and we're doing it in style, with a live set from wacky Stockholm collective THE MEXICOS and special secret guests! We've had an exciting first year, packed with spectacular live performances and fantastic floor-filling sets from both resident and guest DJs. We've played host to a diverse mix of artists in a variety of venues, from Swedish-language crooners Vapnet, who wooed a seated crowd at an intimate Sleazy's gig, to elusive underground electro producer Mr Suitcase, who set the dance floor alight at a packed Admiral Bar. For many of the musicians, it was the first time they had played outside of Sweden, and after the warm reception they received, most are already planning return trips. Founder Stacey Shackford has a nose for sniffing out new up-and-coming talent, and several SOS acts have gone on to be nominated for the Manifest Awards, Sweden's version of the Emmys, including Maia Hirasawa, Hello Saferide, Blood Music, Vapnet and Suburban Kids With Biblical Names. SOS has appeared in several publications and music web sites, both in Sweden and the UK, including a special feature on Swedish pop in the Guardian. We have worked together with other Glasgow venues and promoters (including Out To Play, El Rancho Relaxo, Dolly Mixture, Edinburgh University Indie Society, Pop Theory, Drunk At The Pulpit and The Winchester Club) to facilitate opportunities for Swedish acts we couldn't fit on our bill, and have also helped to build a network of other Swedish club nights across the UK. And we recently teamed up with Stockholm club Starfly to expand - and possibly export! - our operations. We simply love Swedish pop and our mission is purely to help the artists and promote it in any way we can, and to that effect we operate as a non-profit. This year promises to be just as exciting, starting with our birthday celebrations on May 11. We'll be returning to the place where it all kicked off a year ago (Friday, May 12, 2006 to be exact) - The RAFA Club on Ashley Street in the Woodlands area of Glasgow. With their crazy repertoire of cheesy yet genius electro covers of artists like Toto, Bryan Adams and Aaliyah, THE MEXICOS will surely get the party hopping. The Stockholm collective features Mikael Hall, Douglas Holmquist and an ever-changing motley crew of friends, including members of Oh Sweet Music and Suburban Kids With Biblical Names (who will also be playing a gig at Nice n Sleazy two days earlier, on Wednesday, May 9). It will be their first UK appearance.There will also be surprise guests doing their own covers of Swedish songs, and other special treats!
The Mexicos: