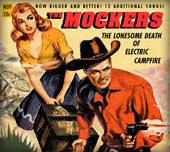 For some reason, until I was at the SYLQ show in London a couple of weeks ago, I never heard of The Mockers. Los Mockers, the Uruguay 60’s mob yes, but not the American variety. It’s been my loss. Anyway, “The Lonesome Death of Electric Campfire” is a fine example of the intersection between superior power punk and NRBQ. And of course, the kids in Spain love them. They’re even on the same label as Nice Man and the Bad Boys. But let’s make up for lost time, “Real Enough For Me” chimes in with that guitar thing that does it everytime. “Doin’ Time” really reminds me of Guadalcanal Diary. So much so that I’d swear that Murray Attaway was singing.
This is a prime example of how roots rock can just bubble away in niche markets which of course is a great thing. It makes a nonsense of the “machine” and indicates that profile should never be confused with an actual hard and fast audience, irrespective of location. If MTV had any power any more then “The Emperor Strikes Out” would be all over it like mud on a pig, you can see the video here. Ever wonder what “Ca Plane Pour Moi” would sound like with a Fastbacks type rocket strapped to it’s arse? While you’re at it, check out “Highway Star”, that’s what really tipped me over the edge. You can always tell the calibre of a band by their cover versions and this to me signals the complete and utter genius of this band.
If you’re a long-standing NBT reader and you know what makes this tick then you’ll really get off on this record. They make the kind of noise that saves souls. At least while it’s flying out of the speakers. Teenage Fanclub types will find much to sooth the cravings also. Put simply, this is perfect pop music. The kind that will always be around to help us out of grave situations. 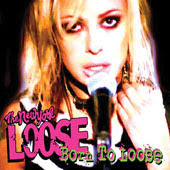 On the flipside of that is a group called The New York Loose that should have been a legend in their lifetime. Thankfully, even although they gave up, they never gave in. “Born To Loose” is a collection of rare and live sides that indicates just how great they were. It’ll hopefully provide those who never came across them with the smarts to petition a reissue of their fantastic “Year of the Rat” album that came out on Hollywood Records many moons ago. Brijitte West should have been a star. She should have been on the cover of all the magazines. However, the various powers that were, blew it. Imagine if The Dolls were The Sweet fronted by Suzi Quatro channelling Chrissie Hynde. Man. This lassie could pout and by all accounts still can. That’s why she’s giving this rock thing another roll of the dice. “Bitch” starts the whole ball rolling with that patented NY skirl that makes our eyes water every time. The kind that very few bands this side of The Star Spangles are capable of wrangling. “We are the monolith kids” goes the chorus of track two and they were so right. “Pretty Suicide” is THE glitter rock anthem in waiting. I could describe them all to you but wouldn't you rather bathe in the glam-deur yourself? There are 19 tracks and an added bonus of video enhancements. “Lord Won’t You Send Me A Devil” sends me spinning back to the Lower East side watching The World Famous Blue Jays bring down that amphetamine country which was much in its infancy at the time. Brijitte also had a band called San Dusky after the Loose called it a day which carried that roots sound into a more contemporary setting. It too should have put the lady on the map but they were gone almost as soon as they started. Look out for NYL shows to tie in with the release, check out their myspace page for details. You can bone up on the history and make like you were into them all along.
It's out May 14th but you can pre-order it here.

Better late than never after all. Just like me and The Mockers.

Sort of wanted to see The Drones tonight but the thought of three bands at Barfly is too much for a school night. Maybe I could go see The Choke on Tuesday instead and leave before Theatre of Hate. That could be a plan? Still smarting at not being able to see The Scientists on Thursday but what's a skint, burned out guy to do. At this point, The Black Lips seem like a poor substitute but let's give 'em the benefit of the doubt. Thinking about it is making my head nip so out into the fresh air I go...

Posted by Lindsay Hutton at 4:10 PM