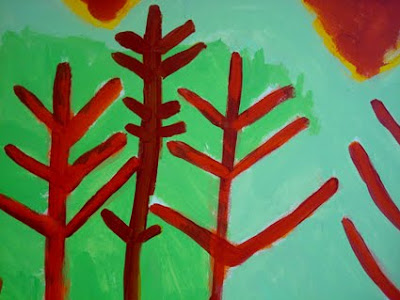 Wild conditions here in Glasgow, we are open of course.

We are extremely pleased to announce this year's Project Ability show which brings colour, vibrancy and excitement to the walls of Mono. This year's show features the work of Tommy Mason, one of the founding members of the artist-led group, Artrek & Friends, who has been with Project Ability since 1990. The exhibition opens on Thursday 9 December from 7pm with performances by Alasdair Roberts and R M Hubbert and International Airport djs. There will be raffles, prizes and a small shop full of handmade original items. This is a free event.

There's a record we've been enjoying a lot since we got a promo of it back in September. Charles Douglas, The Lives Of... on small Manchester imprint, Broken Horse is a real curio. It first appeared on the No.6 label in 1999 and after selling out its pressing disappeared. Douglas is a smart, deadpan New York City kind of guy who writes hilariously about this doomed record in the sleevenotes – Mo Tucker on drums and production, Kurt Ralske (UVS) and Dean Wareham couldn't save it or the group from their own junkie fate. But what they left behind is a nugget of a record; classic, melodic scuzz in the great style of the Modern Lovers, Jim Carroll Band and inevitably, the Velvet Underground. In the end - a winner.

Monorail Film Club returns on Sunday 19 December with seminal horror, The Omen presented by filmmaker, Gregor Johnstone who will also be screening his own short, I'll Be Right Here. GFT, 7.15pm.
Posted by Lindsay Hutton at 7:00 PM