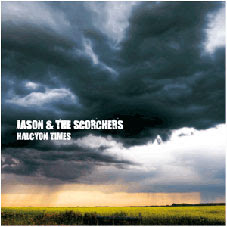 As if I wasn’t confused enough. Jason and the Scorchers are back sounding like they’ve never been away on “Halcyon Times” their new record on Jerkin’ Crocus. The turbo-charged roots rockers are one of the combos that lit the blue touch paper on the Americana malarkey. Lifting it out of the “country rock” pigeonhole and invigorating that foundation with whopping dollups of rock. Straight out of the traps, “Moonshine Guy” (in a six pack world) is about an individual that digs The Stones but doesn’t care a jot for The Doors. Like a Nine Pound Hammer hoedown where they’re doin’ it for Hank. “Land of the Free” should tickle fans of the Drive By Truckers “Southern Rock Opera” as it includes shards of both Skynyrd and BÖC plus a whole lot more.

“Days of Wine and Roses” sounds familiar because it taps into the mood of all the great loud country we’ve come to appreciate like premium liquor. The twang that matters combined with a predilection for a good riff. And is that Dan Baird on “When Did It Get So Easy (to Lie to Me)?”Here are 14 songs that’ll be sharing a stage with the “hits” when the band takes to the road in May. “We’ve Got It Goin’ On” boasts the finale. If that means a rip-roaring, punk-rockin’, honky tonkin’ snifter for what ails you then they have indeed.

... and here’s some guys that used to be on EMI America too. They both outlived the imprint and are indelibly tattooed in hearts and minds across the planet. Blessed are the faithful indeed.

Posted by Lindsay Hutton at 6:34 PM