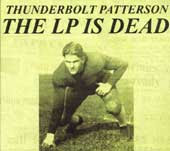 Of all the overtures I make about exploring new avenues of music of all types, I have to admit that I’m always happiest with loud fast rock’n’roll. The first round of this album took me back to Glasgow last autumn when Cj Ramone, Daniel Rey and Brant Bjork joyously laid the best Ramones set on us that the brudders never played. JP has captured that brand of energy and added a few of his own ingredients. A couple ounces of glam, a smidge of power pop and some hard rockin’ chops all simmered together in order to deliver a considerable sucker punch. Americans still use imperial measures so run with me on this alright?

Swinging in with the title track, I got to thinking that this should be available as a set of 45’s. Or for extra loudness in the cut a caseful of 12” singles. “On and On” reminds us that although Slade perhaps didn’t break America, they certainly marked their territory.

Abetted by Dean Rispler and CJ Sciosca, I can unequivocally recommend this to you NBT types because deep down I know you can’t get enough of this stuff either. JP prompted me to say that it’s the best thing I ever heard and that it could be a huge hit in the UK. I can tell you that it’s right up there and I don’t think I’ve heard a celebration of good ol’ new York rock like this in quite some time. I would feel a lot better about my country of origin if this could indeed be a hit here but there’s simply no such thing anymore. I like to think that I still know one when I hear it though and “Hand Grenade Heart” is reverberating around my noggin bigstyle. There’s more to JP than him just being the drummer with one of the greatest combos that ever was. Often a maligned species, this one has several strings to his bow, in addition to being a diamond geezer.

There’s a great interview with the man by The Barman here that goes into some detail about what you can expect.

No Fun releases are available via Get Hip and ostensibly from the remaining good record stores that are peppered a cross the planet. However, if in doubt – go to the source.
Posted by Lindsay Hutton at 6:20 PM