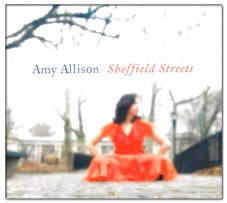 Amy Allison’s “Sheffield Streets” is her first release on the Urban Myth imprint. It comprises 12 songs that she recorded out on the West Coast (of the USA, not in Ayr daftie) with her old Parlor James bud and seasoned drummist Don Heffington. Putting together a crack squad of LA’s finest, Amy revisits some old material and sets those beside new songs to once again display that she’s one of the best songwriters on earth.

The title track is a hymn to the big town she resided in for some time in the 80’s and it features some authentic colliery band style backing. Country and pop styles abound and by my estimation, “Anywhere You Are” is as good as anything Diane Warren was ever involved with. A big hit in waiting for anybody with ears that can admit they could never come close themselves.

There’s a version of her Dad’s “Monsters Of The ID” that features Mose and Elvis Costello. And “Everybody Ought To Know” as a duet with Dave Alvin. I guess this makes Amy one of the Guilty Women by default. Ryan Hedgecock, Van Dyke Parks and DJ Bonebrake are just some of the individuals that pitched in to make this latest selection. I’d hope that readers of this would be familiar with Amy by now and can recognise her greatness.

She’s set to head back this way to continue work on the album with Sir David Scott they began around a year ago. Listening recently to her back catalogue, it’s only the ignorance of cloth-eared radio producers and pundits that has gotten in the way of her success. Not a predictable, malleable talent, Amy is in many ways like her old man. A complete and utter treasure that just can’t be pigeonholed but that ALWAYS delivers.

Listen to "Why Can't It Be?" at her myspace.
Posted by Lindsay Hutton at 3:39 PM

We should make her OUR national treasure, before the yanks catch on. Here's a youtube I made of the title track:

Hey Jim, Thanks. Of course, you're right. I posted your video the other day but it's doesn't hurt to serve up a reminder. Good work on all the "Sheffield" action!

Amy should be an INTERNATIONAL TREASURE!