So the snow squall outside seems to have subsided but that matters little because I'm not venturing over the door again today. I'm listening to Stefan's SBB show from the other night. I missed it but thanks to the wonders of the interweb I can hear my Uncle Eric croon "The Downside of Being a Fuck Up" as I gather my thoughts with regard to what's been happening since Thursday.

Not sure exactly where the last couple or three days have gone but they scooted by alright. National Express even got the train into town five minutes or therabouts early. Kings Cross station is undergoing major renovation and it's a pain the arse. Don't even get me started on the pastie kiosk not being there. Anyway, you have to go out to venture into the tube station so I noticed it was a cracking evening weatherwise. This brought me to the decision that I'd take the train to Hammersmith and walk around the Thames to Chiswick. If you've done that route then you'll know what I'm talking about. It's a very relaxing trek and so far removed from the hububb. Watching the sun go down as I approached my destination was a bit of a metaphor for the trip.

So a quick hit and run and we're headed for the centre of town for a wee aperatif prior to going to Madame JoJo's for The Jim Jones Revue. The spot was The Phoenix Artists Club and it's a nice slice of old London quaffing. Plus you have to get signed in after 8pm. JoJo's itelf is a cracking place too. Mainly a burlesque joint these days, it presents a classy club showcase atmos but the bar has no beer on tap!

I think that JJR album is pretty good but I have to say that I didn't rate the show. The sound was awful. Everywhere in the place. They do look good and make a first rate stab at channelling that 50's glam but I don't actually hear any songs. Making my way to the back I was thinking that this would make an ideal opening band for Primal Scream. By the time I made a quick pitstop in the wee laddies room. I came out and was standing three feet away from Bobby Gillespie. I don't dig those kind of omens. Maybe I'll see the JJR again if they play up north. Maybe I won't. I really do hope that my general verdict of style over substance was a blip but I doubt it. There were a lot of very good looking girls there so they must be doing something right.

So that takes us to Friday and a lunchtime hookup in Camden with Mike "Saucerman" Mastrangelo who has a new gig up that way. Couple of pints and some bangers and mash in The Worlds End really did the trick. After that we took a wee schlepp up to Inverness street to Mega City Comics and the fantastic "Sounds That Swing". I'm really glad those places are still there but really wish that "Rock On" and "Compendium Books" were too. I remember buying Back door man mags and "Home of The Brave" by Bonnie and the Treasures on the same day but don't recall much of what happened just this morning. We travelled to Camden by bus and went through many old haunts such as Praed Street home of Bizarre Records.

Arranging to meet BB, Suzy and Joey Quattro in the fabled Wardour Street watering hole The Ship, where some of had also been the night before. Another great spot that seems to have been untainted over the years. Some of the ROCK they blast is a little unnecessary but they have first rate bar staff. Some of whom wear very sweary t-shirts. Anyway as Dave and Penny headed home for a date with Toody and Muldoon I headed for the DWC with the Quattros. Such a pleasure to see the kids again.

So it's nearly showtime and it was cool to see such a cool coterie of folks come out. I have it on excellent authority that the opening band Vinny Vinny were line Ocean Colour Scene. I realise that perhaps there is a god after hearing this verdict having missed them. The Buckle Ups played a short, sharp punk rock dipped in metal set. Possibly the entire opposite of the opener. Such youthful optimism and an understanding of Ben Weasel's place in the scheme of things is something I wish more bands could appreciate. 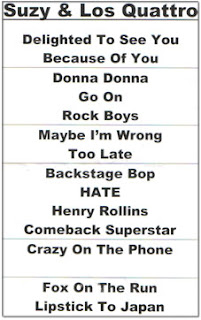 And now it's Quattro time and I don't think that I need to take several paragraphs here. This was the best I've seen them. In terms of pace, playing and choice of songs then this was an excellent set. No fannying about or stopping. Just straight down the line first class. The version of "Too Late" was arenarocktastic. I think the crowd thought so too.

My Drug Hell followed them. I don't care for this at all. I'm not even sure why but maybe it's like the sound of this austerity trip that's going on. I want a bit of fun or glamour. And so did Ollekarlsson who made a surprise appearance in beautiful uptown(?) Tufnell Park. A bit of Quattrophenia, not some miserabilist exercise in making me even more forlorn. It's like music for students who oughtta be old enough to know better. Actually, the sounds aren't as bad as the band name. Blimey.

And that, as they say is that. Martin dropped Qina off then me but it was a grand evening. Train trip back was uneventful but I ran outta credit on my phone and couldn't call a taxi or anybody to come get me so I had to walk 3+ miles home in the pissing rain. Serves me right for having too much fun? Maybe so folks. Maybe so...

The Q's are in Brighton tonight so you really need to get down there if it is in any way possible. They've got the power to alter your worldview through pop music. No artificial stimulus necessary. By this time tomorrow they'll be back in Barcelona and you'll have missed your chance. But they shall return. And yo'll find all the info on that right here when it all goes down.
Posted by Lindsay Hutton at 12:02 PM

wish i was walkin' with u in the rain.

the verification word is "plockers". sounds like a word u would use, chief!

Glad you had a good trip Lindsay. Great to see you as usual and to meet Qina. I thought the Quattros were TERRIFIC! Shame the audience was not huge, I suspect it might have even been slightly fewer than their last DWC appearance. A great show and great evening. See you in Grungemouth soon!