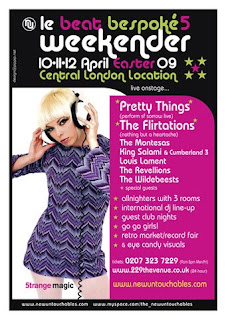 TICKETS ARE NOW ON SALE AND CAN BE BOUGHT ON LINE FROM WWW.229THEVENUE.CO.UK

In the four years since it started, Le Beat Bespoke weekender has built an international reputation for being the wildest party of the year. Combining the very best live bands old and new – previous acts have included Arthur Lee and Love, The Sonics, The Chocolate Watchband, The Horrors, The Remains, The Buzzcocks, The Fuzztones to name a few – with DJs from across the globe playing records until dawn, it's the thee-day party tailor-made for all lovers of the '60s underground and beyond. 2009 marks both the fifth instalment and the best one yet. Over three nights and days on Easter Bank Holiday weekend, DJ Dr Robert (compiler of the renowned compilation album series also titled Le Beat Bespoke) and his New Untouchables team have assembled a killer line-up that'll be unmatched anywhere else all year.

Since it was first released in 1968 The Pretty Things' 'SF Sorrow' album has grown in stature and reputation to the point where it's now a regular fixture on magazines' Greatest-ever albums lists. Recorded at Abbey Road in in 1967 at the same time as 'Sgt.Pepper's…' and 'The Piper At The Gates Of Dawn', 'SF Sorrow has inspired everyone from The Who and Blur to The White Stripes, MGMT and Oasis. This Easter The Pretty Things will be performing the album in its entirety for only the third time ever and seven years since a sold-out show at London's Royal Festival Hall back in 2001 - not to be missed.

South Carolina soul sensations The Flirtations have long been idolised by soul fans for peerless '60s singles like 'Change My Darkness Into Light' but they've recently won a new audience when their Northern Soul classic 'Nothing But A Heartache' was featured on a KFC advert. Headlining on Sunday evening, expect the main ballroom to be treated to soul music that's as danceable as it is heartfelt.

As usual, LBB is as much about new bands as it is old, and the NUTS team have trawled the world to bring some of the best new talent to London this easter. Two German bands make their British debuts: German fratrockers The Montesas and Cream-style power trio Louis Lament have both built up a reputation on the continent for being unmissable party bands. On Saturday afternoon legendary garage club Dirty Water will be showcasing some of the bands on its new record label, including Ireland's The Revellions, Scottish beat act The Wildebeests and London's King Salami & the Cumberland 3.

Live music is only part of what makes LBB so great, though: it's a party planned by people who like good music for people who like good music, so when their international DJ line-up does their thing, you can expect to hear the very best in everything from Garage to Rockabilly, Folk to Funk, Psych to Soul, Freakbeat to Britpop, Ska to Club Jazz and all points in between. Plus there's the most beautiful go-go girls, the trippiest eye-candy visuals, the freakiest cult cinema, guest club nights, an all night bar, art exhibitions and a huge retro market selling choice vintage furniture, clothes, vinyl and pop artefacts. 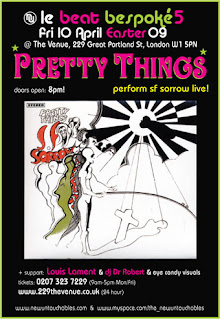 Posted by Lindsay Hutton at 6:08 PM