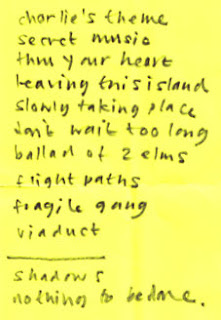 Friday saw a capacity crowd hit up The Tolbooth in Stirling for the first night of the annual Le Weekend shindig.

Kicking things off in the bar was the pastoral stylings of the National Jazz Trio of Scotland. There were at least five of them though including the great Bill Wells so I'm not sure who was responsible for the arithmetic...

Tape (from Stockholm) was first up in the auditorium and whilst they might be OK to listen to in your own immediate environs, I couldn't honestly tell you that it makes much of an impression live. I'm not down with laptops as a viable alternative to the stratocaster, or any other guitar come to that.

Taken By Trees (also from Stockholm) is the new Victoria Bergsman (ex-Concretes and voice on the P, B & J "Young Folks") vehicle. It continues that similar pop furrow and her band perfectly complements the rather fragile nature of her character. That's not to say that they can't cut loose though and by the close of a perfectly formed version of G'nR classic "Sweet Child Of Mine", they were rocking the house like all get out. There was marked increase in volume too which chased the remaining memories of the somnabulist sounds of tape out into the foyer. I didn't know that the album was out on Rough Trade but it is.

Soon it was time for The Pastels. Their set list is up there to your right and much of it may be work in progress but it sounded great. The melding of the brass into their patented rattle is a peculiar formula which shouldn't really provide the tickle that it does. There's a lot of soul in what their doing. It's not black or white or any tangible colour, it's just for real. And never more so than when Katrina is singing. The thing about The Tolbooth is that the sound in that place is always great and crystal clear. The set was practically orchestral to that effect.

Introducing a song called "Secret Music", Stephen said that it was from an album that they'd been working on for "most of their adult lives". As far as I know, any similarities between this condition and Axl's "Chinese Democracy" are utterly coincidental.

"Nothing To Be Done" closed the first Le Weekend instalment of 2008 on a particularly unreachable high. I wouldn't want to be looking down from that altitude.
Posted by Lindsay Hutton at 11:36 AM