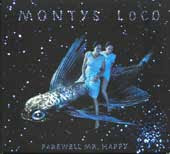 Montys Loco is a peculiar name for a musical combo, I’ll grant you that. It occurs to me that it might be taken from a comic book called Robotman but you never know. Anyway, “Farewell Mr Happy” is the fourth(!) album by these two Swedish women.
Anja Bigrell and Marie Eklund make an unusual sound that comes over like Roxy Music going equal parts exotica/electronica. Anja’s vocal reminds me of Eva Parker from the great Scandopunk group Parker, with a little twist of Bjork but maybe that’s just the inflection rather than the voice itself.

Imagine if Shakespeare’s Sister had decided to introduce a Rev/Vega aspect to their work. I never heard anything quite like and their songs come across as oddly infectious. I don’t think that you can listen to “Ages Ago” at their myspace but have a wee taste of what is there. The first word in “Whose Blood” is “Saunter”, one that I don’t associate that with the Swedish language at all. “Nice White Boys” is a tad Carl Stalling.
I can’t find any information as to what makes this strange assortment possible let alone tick so virulently. I’m not even sure that’s a word but it describes what I’m too gobsmacked to explain any better. This gear is pretty fresh and not in the hip hop sense of the lingo.
ML display an experimental edge that approximates trip pop. I think they might be on to something - as opposed to being on something. Or perhaps even both?
Posted by Lindsay Hutton at 6:27 PM