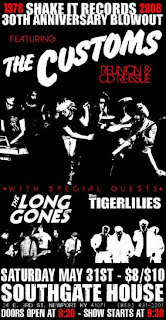 The Customs are back, for one night only though...

...with The Tigerlillies (from Ohio as I recall but can't find anything on the web strangely) who almost appeared on the never-released NBT comp way back when such considerations could almost be realised.

That and The Quick are on myspace. can't be sure what year I'm existing in but all of a sudden the soundtrack has gotten real good!
Posted by Lindsay Hutton at 6:18 AM