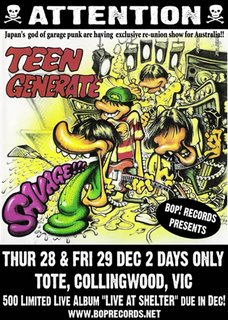 "You’ve seen Guitar Wolf, you know The 5678s, you heard about The Gimmies, now you can get the real action. Bop Records and The Tote announce two exclusive Australian shows of the true kings of Tokyo Garage Punk, Teengenerate. The Tokyo quartet were at the spearhead of the mid 90s Japanese Garage Rock Craze. Although they only existed between 1993 and 1995, their impact on rock 'n' roll was enormous: garage rock would not be what it is now without them.

Centered around long term musical collaborators (& brothers) Fink & Fifi, together with Sammy and Shoe, Teengenerate recorded everything in the red - the fuzz became a fifth member. Far from a gimmick, as their stand out long player Get Action suggests, (along with a hoard of 7 inches, split singles and comps), these guys were wild and tight. Their records have also included covers of Radio Birdman's "Burn My Eye", The Eastern Dark's "Johnny and Dee Dee", "Savage" by The Fun Things and "All I Want" by the Dirty Lovers. Following the demise of Teengenerate, members continued playing in other name droppers, including Firestarter, Supersnazz, and most recently the reformed Raydios.

After recently reforming to play Billy Bass Wolf’s memorial gig, Teengenerate have now agreed to take the trip down under to pay their respects to the Australian music that so influential in creating their sound.

Your only chance to catch Teengenerate live is at The Tote on Thursday 28th December and Friday 29th December. To celebrate this visit, Bop Records are releasing the "Live At The Shelter" album to coincide with the tour. Tickets are $30 + bf and available at The Tote Front Bar (3 9419 5320), Missing Link, Polyester and the Corner Box Office (www.cornerhotel.com). "

you know, its great that teengenerate are playing again and everything, but don't get too excited...

i saw them at the dot dash fest last year, and it was an anti climactic show...they played maybe 10 actual teengenerate songs...the rest were songs by "post" teengenerate bands...

so out of 25 songs or so, only 10 were teengenerate songs!