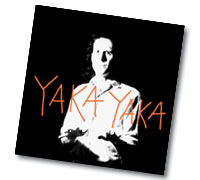 Yaka Yaka is the password to Peter C Johnson’s cave. The latest recording to emanate from that lair is a stark reminder of this guys talent. More orator than vocalist, PCJ recites like a seasoned broadcaster. The music is at times more atmospheric more than instrumentation and the result is equal parts bleak and reassuring. Like Johnny Dowd channelling Nick Nolte or maybe if Kris Kristofferson had recorded Lou’s "Berlin". You’ll get some kinda ballpark idea of where this is both coming from and headed. A tough fragility bordering on psychosis and not a thousand miles from the sound of Dire Straits if they found themselves in a Deliverance situation. I’m not sure what a “subterranean cluster fuck” is but it’s probably not pretty. I do like the way Ardys Flavelle says it though. I also find the reference, "the best way to dismantle someone is to isolate them" that occurs in his apocalyptic take on "I Still Miss Someone" to resonate chillingly with my own journey of late.

Like Joe Meek dabbling in country/folk backdrops, the version of “Victims of the Flood” here is entirely different to the one he recorded in 1978(?). He certainly has a way with words (and sounds) that sits entirely apart from anything else you ever heard. On the site, the album is described as “one man’s story of loss, grief, confusion and redemption in a violent world”. It certainly doesn’t conform to any single shard of commerciality but it shimmers all the harder for it. At the moment it’s only available from CD Baby. I think you can listen to it there too and you should make time to do that. It’s quite a journey. Jimmy Ryan from the Laura Cantrell troupe appears on “The War Is Over”. The sparse, spare stylings of Peter C. Johnson are exactly what you need to get acquainted with over these coming winter nights. This isn’t something that’ll hit you instantly but if you give the chance then there are depths to be mined here and it never sounds the same twice.
Posted by Lindsay Hutton at 6:22 PM