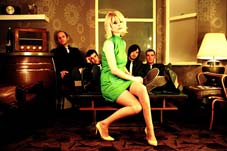 What’s in a name? I have to tell you, that on first impressions - Lucky Soul strikes me as something that might appear on something like (sharp intake of breath here) X Factor. The e-mail that introduced me to them could so easily have been spam but it wasn’t. There was a charm about it and that particular commodity doesn’t come that particular processed meat product in any manifestation. So anyway, Lucky Soul, as it turns out is a very groovy London combo which could almost be Swedish. Such is it’s predilection for knocking out a great pop tune. They’re just about to put out their third release on Ruffa Lane. On December 11th to be exact. And it’ll be available as a 7” EP as well as a three track cd. “Ain’t Never Been Cool” will undoubtedly further cement the reputation they seem to have been building up over the course of the past year or so. With the popularity of acts like The Pipettes, then maybe the UK hit factory isn’t dead after all. Ali Howard’s vocals evoke all the great girl group singers you ever heard without actually sounding like any of them. If you ever had a soft spot for those fantastic Tracey Ullman singles on Stiff then this is for you.

The band have a tight rein on providing just the right jetstream for those to float on. Like The Maisonettes vs The Wilsations via the Rezillos, this stuff'll have you singing into your hairbrush or digging out that tennis racket from the back of the cupboard. Air guitar is not a symptom of this kind of timeless beat. LS should be enlisted to represent the UK in the Eurovision Song Contest because then they’d have the platform to reach the people who will lap this stuff up. The “gots the magic” alright. If you look up “effervescent” in the dictionary in coming years, it might well have a photo of these folks. As ever, if you think that I’m twisting that melon of yours or whatever then the proof of this sumptious pudding is merely a click away. They’re also playing the fabulous Debaser club in Stockholm in December, see dates below…

28 Nov - The Fly
05 Dec - Bardens Boudoir
15 Dec - Debaser, Stockholm, Sweden
31 Dec - New Year’s at the Hope & Anchor
Pester your local non-chainstore, although HMV has copies of the vinyl on all three releases at keen prices. (Thanks to Seb for the info and for taking the time to alert me to their existence. Sometimes operating in one's own time/space continuum can be limiting.)
PS - The Lucky Soul shop is now open...
Posted by Lindsay Hutton at 9:31 AM